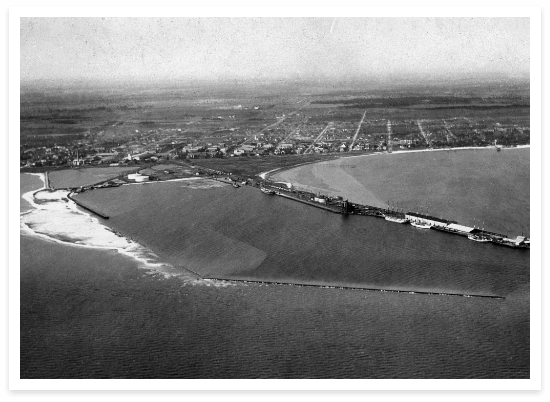 Although the present day Port of Gulfport was officially established in 1902, the area’s strategic location along the Gulf of Mexico has made it a destination for vessels for more than 300 years. As far back as 1699, the French explorer D’Iberville used the natural basin on the lee side of Ship Island as a safe haven. In 1961, the Port of Gulfport became a state-owned facility and has continued to expand its business interests and facilities. For many years before and after the Civil War, the port was a primary site for exporting lumber products. During South Mississippi’s timber boom, this location was ideal for a port to connect with the Ship Island anchorage. This strategically situated port resulted in the founding and naming of present day city of Gulfport. Within its first decade of operation, the Port of Gulfport became the world’s leading exporter of yellow pine. When the region’s yellow pine forests began to diminish, the port sought out other business opportunities. The proximity to Central America led to the importation of huge quantities of bananas. The port became a serious competitor in the Gulf of Mexico when Dole and Chiquita arrived in Gulfport. Over the years, the port has faced many natural disasters, two of which completely leveled the port’s facilities. Hurricane Camille in 1969 and Hurricane Katrina in 2005 left the port devastated and forced to rebuild from the ground up. The innate resilience of the people of the Mississippi Gulf Coast and their desire for a world-class port were the catalysts for both rebuilding efforts. The Port of Gulfport continues to thrive and meet aggressive targets. The Port is now the third largest container port on the Gulf of Mexico, among the top 2O U.S. container ports and the second largest importer of green fruit in the nation.

For a more in-depth look at the history of the Port of Gulfport and the City of Gulfport visit www.historicalsocietyofgulfport.org.